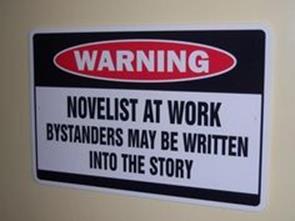 I just scanned through the ‘novels’ section of a particular writing forums workshop area. To say that I was disappointed would be putting things lightly. One particular work stood out and I’ll explain why.

In the post leading up to his/her writing, the author asks if this chapter was something in the middle, an infodump or good writing. He/she then goes on to post almost 3k of words that is nothing but information about his character’s background. I stopped reading after the second paragraph because it was nothing but a combination backstory and infodump all in one and ended up boring as hell! And what made things worse was that there were people who actually thought it was good. God help us readers!

See, there’s a fine line between writing backstory and doing an infodump. What he wrote there was both in one and if I looked at that novel on the shelf, I’d’ve put it right back down and walked away. Sorry, but I don’t care to know everything about a person’s ethnic background and family all up front-even if written in first person.

Ok, the first 300 words of this story is nothing more than backstory/infodump about background, genetics and how the character’s grandparents met. Really? Really? This is important shit to put at the beginning of a novel? I don’t know about you guys, but it’d put my to sleep.

Now let’s contrast what I describe against the first paragraphs of my Athol novel, which is also written in first person.

They say that man’s basic nature changed as he evolved and moved further out into space; that his urge for violence against other members of humanity faded. In my opinion, that’s a crock of shit but that’s neither here nor there.

One thing about being in my line of work, you always get to see the true nature of mankind, and it isn’t pretty. Someone is always lying to another person, or committing a crime and getting away with it or even trying to steal from other criminals. Either way, it’s enough of a shit soup to shoot down that optimistic garbage.

I watch the people entering and exiting the subway, staying ever vigilant that someone might sneak up on me again like on Earth. That’d been a close call and frankly I’m surprised I’m even here to write this.

Believe it or not, the safest place to sit on the train is a window seat. No matter how you cut it, no person can see behind them; it’s physically impossible, but there is a way to cheat. Most people don’t notice it but every once and a while but a window, especially at night, reflects what’s within its field of vision. And in this case it acts like a mirror and allows me to see what’s going on behind me.

At this time it’s just a mother and child who are on their way home from a shopping trip. They’re about as non-threatening as vanilla ice cream but that doesn’t mean I won’t keep an eye on them. Anyone can be a hazard for a person like me so I remain vigilant.

What’s funny is despite all this internal vigilance, anyone looking at me from the outside would just see a brown haired seventeen year old girl wearing a blue-black cloak and gloves. Given that it’s the winter and the temps are low, there’s nothing out of place about it. And that’s how I like it.

Despite my best efforts, the gentle rocking and the wheels’ sounds start to lull me towards sleep. It’ll take a good hour more to reach where I need to be, so I keep on eye open while dozing. No one with any brains will try to make a move in such a contained area without any means of escape, which allows me to relax just a bit.

Now, this shows a lot of character while not pulling an infodump on the poor reader. Which would you rather read? Opinions?