I remember going there while in High School. It was humbling to look at such a rural area and know that thousands of men fought there and it wasn’t against a foreign foe. No, it was American against American, brother against brother, in the one war that scarred this country more than any other. I hope that another one doesn’t happen but I’m starting to feel that there’s an inevitable collision course as this country continues to fracture into what can only be called ‘two America’s,’ with each having a diametrically opposite opinion about what works and the course we should take. 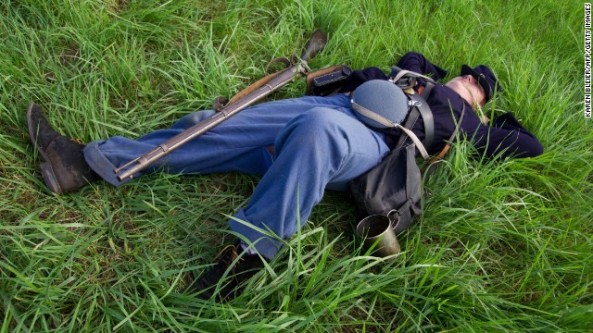 (CNN) — “For every Southern boy fourteen years old, not once but whenever he wants it, there is the instant when it’s still not yet two o’clock on that July afternoon in 1863.”

So starts a powerful passage by William Faulkner in “Intruder in the Dust.” The Mississippi novelist and poet poignantly painted the scene of dry-mouthed young men anticipating battle.

But the Confederate attack, known in the annals of history as Pickett’s Charge, ended about a mile away in failure, gray-clad troops blunted by determined Union troops at Gettysburg, Pennsylvania.

Those young boys recalled by Faulkner were stopped at the Angle, a stone wall considered the high-water mark of the Confederacy — perhaps the last chance for victory in the U.S. Civil War. Instead, the Union prevailed at Gettysburg, a turning point in the four-year war that claimed at least 620,000 lives.

This weekend and through July 7, between 200,000 and 300,000 visitors — more than the number of combatants — will flock to the town and fields of Gettysburg National Military Park to mark the 150th anniversary of the three-day clash, which cost an incredible 51,000 casualties.

Pickett’s Charge will be the climactic event of a large re-enactment this weekend outside of park boundaries. On July 3, the actual anniversary of the attack, National Park Service rangers will guide thousands of visitors in loose formation across a gently rolling field. Others will stand where Federal regiments poured rifle and artillery fire into the arc of Confederates.

The event ends with the playing of Taps by multiple musicians, a solemn remembrance of selfless sacrifice by the warriors at Gettysburg.

Times have changed since previous anniversary observances, including the 1938 reunion, at which grizzled veterans of the battle met at Gettysburg one last time in an event known for reconciliation. They shook hands across that famous wall at the Angle. Some let out the haunting Rebel Yell.

The 150th commemoration of the battle will tell a wider story than previous observances, officials told CNN.

“For decades, people came here for military and black powder,” said Carl Whitehill, media relations manager for the Gettysburg Convention & Visitors Bureau. “Now they want to know about the civilians and what they endured during and after the battle.”

Mike Litterst of the National Park Service said interpretations at federal Civil War battlefields have evolved in the past 25 years. Besides telling the story of the battles and the homefront, exhibits increasingly stress the importance of the conflict to civil rights and the role of African-Americans, thousands of whom served in the Union Army.

About 400 events are planned over 10 days, including a second battle re-enactment next weekend.

Gettysburg National Military Park on Sunday will hold one of its 150th anniversary signature events, an evening program entitled“Gettysburg: A New Birth of Freedom.” The keynote speaker is historian Doris Kearns Goodwin. Country music singer Trace Adkins and a military band will perform the national anthem.

The ceremony concludes with a procession to the Soldiers’ National Cemetery, where luminaries will mark each of 3,500 graves of soldiers who died at Gettysburg.

“I think it is an opportunity for people to have a deeper understanding of what happened here and how it is still relevant in 21st century America,” said Litterst.

Gettysburg, then a bucolic town of 2,400 souls, found itself directly drawn into the Civil War during the first days of July 1863. Southern troops took the war to the North after a resounding victory at the Battle of Chancellorsville two months before.

Gen. Robert E. Lee’s soldiers on the first day of battle pushed Union troops through the town and onto hills and ridges that eventually played a large part in the battle’s outcome.

“There was street fighting in the inside (of Gettysburg),” said Whitehill. “Throughout the town, a lot of people were shooting muskets out of windows.”

Jennie Wade, while kneading dough, was fatally shot in the back on July 3, the only civilian casualty at Gettysburg,

Gettysburg, now with a population of about 7,800, and surrounding Adams County anticipate a $100 million economic impact from 150th anniversary observances.

Whitehill has spent much of his time assisting nearly 700 journalists from across the United States and abroad. Among international media are German, UK, Australian and Swiss companies.

“One of the things that amazes international visitors and media is why we re-enact this war. It is such a pivotal and painful time for this country but every year we bring it to life and re-enact it.”

First aid tents all over town will assist any visitors and event participants who run into problems from the muggy and warm temperatures.

Thousands of re-enactors go back in time

Don Ernsberger led the building of a replica Pickett’s Charge stone wall for this weekend’s re-enactment at Bushey Farm.

Seventy volunteeers shaped 88 tons of stone to re-create the focal point of the march.

“The Confederates captured that angle for about five to eight minutes and the Union reinforcements came in and pushed them out.”

Ernsberger, who authored a book about the wall and the attack, will portray a Union lieutenant on Sunday.

“I wrote this book three years ago and I hope to see it happen before my eyes,” he said.

An estimatetd 10,000 re-enactors are on hand at Bushey Farm this weekend, said Kris Shelton, media and marketing coordinator for the Blue Gray Alliance, which is sponsoring the event.

The first mock battle went well Friday, said Shelton, who said organizers have detailed logistics plans for the maneuvering of troops at the site.

There’s a chance of rain for the next several days.

“We are historically accurate, but we don’t control the weather,” Shelton said.

Organizers expect tens of thousands of spectators on Saturday and Sunday.

Besides portrayals of the fighting, the re-enactment will include about 200 individuals representing the town of Gettysburg in 1863.

“The civilians living there have done careful research of the residents of the town and they have taken on their identities, including their trade and craft,” said Shelton.

Safety of participants and guests comes first, but authenticity also is a priority.

“People are here to recognize and honor and commemorate what these people went through, the sacrifices of both soldiers and civilians,” said Shelton.

The battles draw re-enactors devoted to donning the proper uniforms and equipment. They can get caught up in the heat of the battle and emotional or significant moments.

“That intensity is something that really sparks re-enactors,” she said. “That combined with leaving electronics and the modern world behind.”

Visitors and participants alike understand that real people died in battle — that freedom had a cost.

While battle re-enactments are not permitted on National Park Service sites — the commemorative clashes will be on privately owned land — such events and the visitor experience at Gettysburg National Military Park are “not mutually exclusive,” said Litterst.

“We want that excitement to spill over to the sites and grounds where the events actually took place,” he said.

The National Park Service does not provide crowd estimates or projections, but it’s clear the park will be busy over the next week, given ranger-led hikes and special programs.

“We will probably see crowds we probably haven’t seen before, or since the centennial,” said Litterst. “For the next couple weeks, there won’t be many places to get some alone time here.”

But for those who want to get away from at least some of the hustle and bustle, he recommends a visit to the East Cavalry Battlefield Site east of town and the park’s Big Round Top, which has a great walking trail.

The battlefield looks much different from even 20 years ago as the NPS worked to make it look much closer to its 1863 appearance. Trees have been removed in some places and orchards planted.

Those with younger legs may be in front. And, like battles of old, there will be stragglers.

“There will be not be a shortage of people with stories and pictures of great-great grandfathers who made that march,” said Litterst. “That is a neat part of the story.”