Things are not looking good.

By Todd Cunningham | The Wrap – 10 hours ago 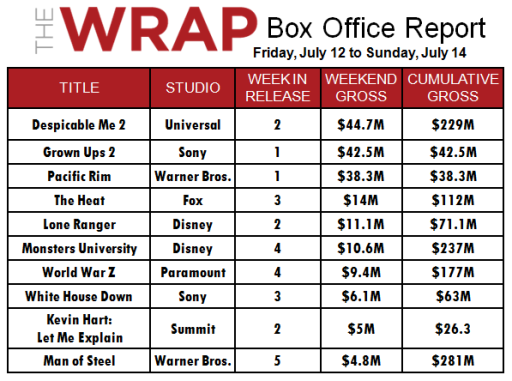 “Despicable Me 2” edged the Adam Sandler comedy “Grown Ups 2” at the domestic box office this weekend, while the surge some predicted for Guillermo del Toro’s “Pacific Rim” never quite materialized — making it the latest big-budget beast to come crashing down this summer.

A big Saturday turnout lifted the animated kids film from Universal and Illumination Entertainment to an estimated $44.7 million in its second week. It passed the $200 million mark Saturday at the domestic box office, just the fourth animated film to do it in that timeframe, and its global haul is now nearly $475 million.

“Grown Ups 2” had led the pack after a terrific $16.5 million opening day Friday, but the family crowd began turning the tide for the minions of “Despicable Me 2” on Saturday — and Sony’s PG-13-rated comedy wound up at $42.5 million. That’s better than the 2010 debut’s $40 million open, and that film went on to take in $270 million worldwide, best-ever for a Sandler movie.

Del Toro’s giant robots-vs.-monsters 3D epic was running second after Friday but lost some steam and finished the weekend with an estimated $38.3 million. That just under where the analysts had the $180 million tentpole movie landing, after weeks of soft pre-release tracking.

Legendary Entertainment and Warner Bros. had hoped the film’s “A-” CinemaScore and strong reviews — it was at 72 percent positive on Rotten Tomatoes — would drive word-of-mouth so that it could play beyond its core audience of young boys and Del Toro fans. But Saturday’s haul was about 13 percent down from Friday’s, which were swelled by $3.6 million.

The fanboys turned out in force, particularly for 3D showings and at Imax, which accounted for a whopping 19 percent of the grosses. The crowd was predictably young (67 percent under 35) and male 61 percent).

“Three weeks ago we were looking at $25 million-$30 million, so we’ve come a long way and this gives us something to build on,” said Warner Bros. head of distribution Dan Fellman. “We have great reviews, a strong CinemaScore and strong word of mouth. Our job now is to take that and expand it beyond that fanboy base over the next weeks.”

Warner Bros is counting on a big international performance from “Pacific Rim,” which should get a boost from Del Toro’s significant international following. It’s off to a decent start with $53 million in 38 markets this weekend.

“Pacific Rim” is the third box-office misfire for a big-budget tentpole in as many weeks, coming on the heels of last weekend’s disappointing debut of Disney’s $225 million “Lone Ranger” and Sony’s “White House Down” the week before that.

A big part of that is the intense competition this summer, which is filled with $100 million-plus would-be blockbusters. The overall box office remains healthy — summer is running about 13 percent ahead of 2012 — and the weekend’s numbers continued that trend. Overall business was up nearly 30 percent over last year’s comparable weekend, when “Ice Age: Continental Drift” opened to $46 million.

moviegoers gave it a “B” CinemaScore and the solid debut underscored the disconnect between reviewers and Sandler fans.

The audiences were young, with 54% under 25, and surprisingly female at 53 percent, suggesting it was drawing families.

The strong showing — particularly since it was competing with the R-rated Melissa McCarthy-Sandra Bullock comedy “The Heat” — signals a box-office turnaround for Sandler.

He voiced Dracula in Sony’s surprising animated hit “Hotel Transylvania,” but his last two live-action efforts – “Jack and Jill” and “That’s My Boy” – have disappointed. The latter film was R-rated and a bid by Sandler to broaden his youthful base, but it came up short. Reteamed with Kevin James, Chris Rock and David Spade, the PG-13-rated sequel — made for $80 million — was right in his wheelhouse.